Holiday travel comes with the usual stresses but this year travelers in a few cities have a more serious worry: possible measles exposure.

Health department officials in Chicago, Austin, Texas, and Richmond, Virginia have issued new warnings about potential measles exposures at locations including airports. All appear tied to one traveler who visited all three airports.

The person contracted measles while traveling in Europe from late November to early December and became sick on Dec. 14, the Austin American-Statesman reported. The person developed a rash on Dec. 17, and boarded United Airlines Flight 790 that same day from Austin to Chicago with a connecting flight to Virginia, the paper said.

Have questions about measles? What to know about the highly infectious disease

Where was the possible measles exposure?

Richmond International Airport: The traveler with measles visited the airport on Dec. 17 from 9 p.m. to 11:45 p.m., according to the Virginia Department of Health. Officials noted that the traveler did not pick up bags in baggage claim and was picked up at the curb by a private vehicle. Officials said travelers may develop symptoms as late as January 11 given the date the traveler was at the airport.

Austin-Bergstrom International Airport: In the city’s first measles case since 1999, an Austin resident with measles traveled on Dec. 17 from noon to 4 p.m. and was in the United Airlines gates. Officials recommend calling your doctor immediately if you have been to these locations during these dates and develop a fever before January 1, 2020. It is important to call and provide your physician with this information before going to avoid potential infection to the clinic. 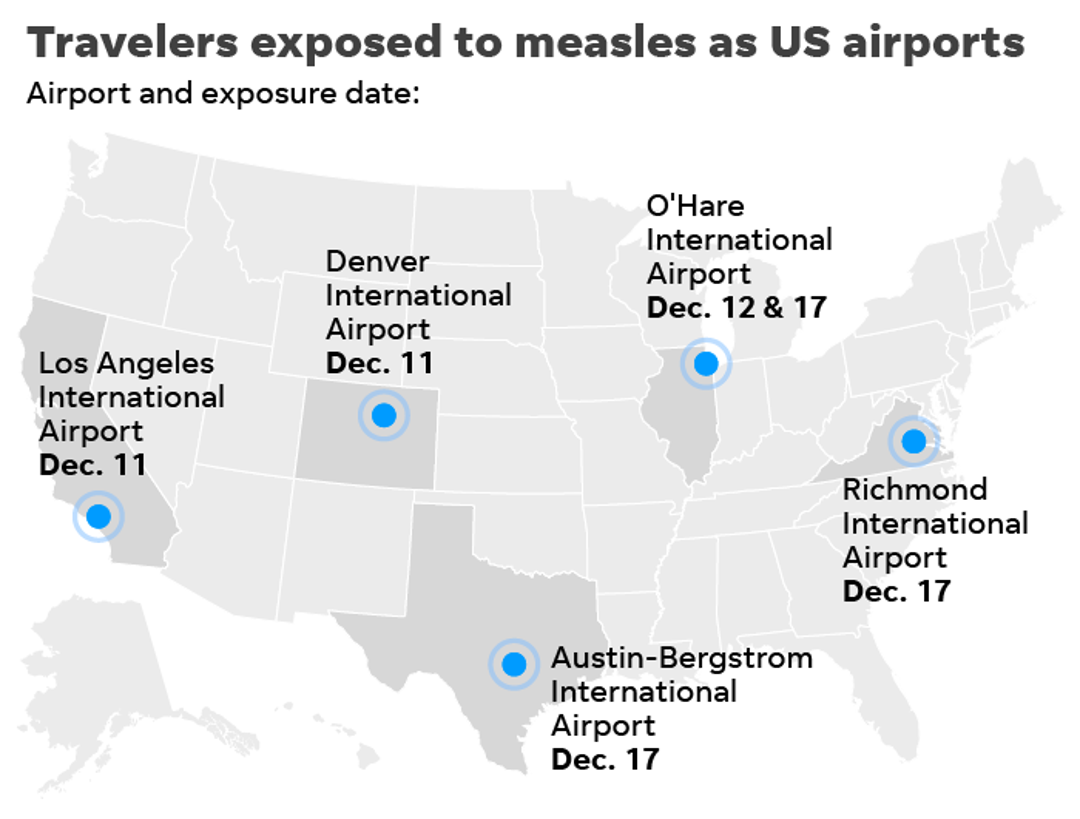 What to know about measles:

Individuals who think they may have been exposed should check their immunization records or contact their healthcare providers to determine if they are at risk, officials said. Those at greatest risk for infection are unvaccinated children, especially infants, pregnant women without evidence of measles immunity and individuals with a weakened immune system.

The rash usually starts on the face, proceeds down the body, and may include the palms and soles. The rash lasts several days, Glatter told USA TODAY via email.

Are measles cases on the rise?

The case that touched three airports during the holiday travel rush comes during a high number of measles cases in 2019. They top 1,200, the highest number since endemic measles was eradicated, Dr. Michael Grosso, chief medical officer and pediatrics chair at Huntington Hospital in Long Island, New York, said via e-mail.

Traveling through an airport an airport – especially a major hub – creates a risk of rapid spread.

“If you’re at JFK, you might as well be in Paris or Madrid,” Grosso said. “We are a world community, and measles is prevalent around the globe — in several European countries, a number of African nations, and parts of Southeast Asia.”

Includes information from Kelsey Bradshaw and Brandon Mulder from the Austin American-Statesman.